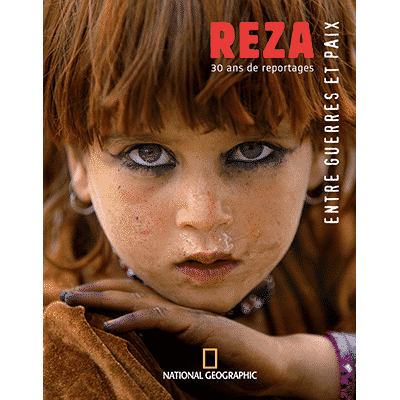 WASHINGTON (Sept. 23, 2008)—Award-winning photojournalist and humanitarian Reza has devoted his life to bearing witness through his camera to the struggles and hopes of oppressed people around the world. In REZA WAR + PEACE (National Geographic Focal Point; ISBN 978-1-4262-0326-8; Nov. 18, 2008; $75), a 30-year retrospective of his work, this remarkable photographer chronicles his travels to places of conflict through exquisite images that pair turmoil with hope, joy with despair.

The book, with an introduction by Reza’s friend, best-selling author Sebastian Junger, follows Reza’s courageous career to the frontlines of war and areas of unrest as a photojournalist for such publications as National Geographic, Newsweek and Time.

Reza’s journey has taken him from his native Iran, where he was jailed and tortured because of his photography, to dozens of countries gripped by turmoil — from Kurdistan to Egypt, Lebanon to Turkey, China to Israel, Somalia to South Africa. Through his lens, which captures not just conflict, but friendship, loyalty, family life and love, he takes us to such regions as northern Pakistan, where cultural shock and mutual incomprehension are deepening the gap between the American military and people in the tribal zones; Libya, a country making strides in economic and social well-being, but not in basic freedoms; Saudi Arabia, ruled by oil-rich princes whose opulent lives are in stark contrast to those of the “guest workers” who serve them; and Afghanistan, whose land and people have deeply touched Reza, helping him find his way in the labyrinth of his own nomadic life.