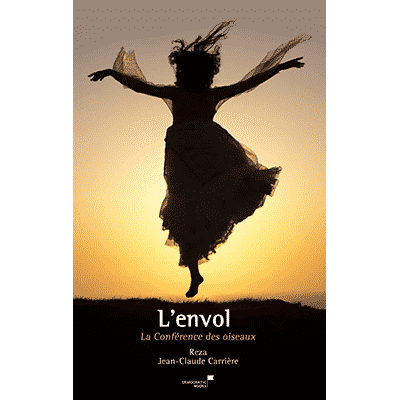 Gazing at Reza’s photographs, Jean-Claude Carrière believed that through them he could perceive the journey in antiquity that was narrated by the Persian poet Farid Al-Din Attar, in the 12th Century, in his poem entitled “The Conference of the Birds”.

All the stages of that journey, the splendours together with the misfortunes, the chance events, the surprises, the astonishment, the ecstasy, the letting-go, the abandonment, the despair, these were all present in the photographer’s work. These images were awaiting nothing more than a glance and a single word.  Therefore, piece by piece, these two men have since then recreated this initiatory flight-of-fancy. They set off together, they traversed the seven valleys, they reached the true king. There was just one surprise element: that the route has not changed, the obstacles remain in place and the same surprise awaits us at the conclusion. The centuries unfold, ruins follow upon ruins, it is we who have not changed.

The book “Soaring” adds another perspective to The Conference of the Birds by Farid Al-Din Attar, the Persian poet, whose work weaves the thread that constitutes the East, from past times until the present day. Through the textual reinterpretation by Jean-Claude Carrière, and a visual journey through the previously unpublished photographs by Reza, “Soaring” carries the reader on a mystical and timeless quest, during which Sufism and the dreamworld interface with each other.