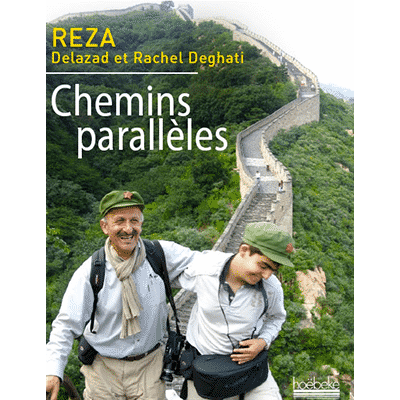 This story is about a promise that one must never betray, a promise made by the photographer Reza to his son Delazad, of a journey across the world.

When he was a little boy, Delazad would cry about being separated from his father, a renowned photojournalist, and would hide in his suitcases. Until one day Reza tells his son: “When you will turn 15 years old, we will embark together, just you and I, on a trip across the world.”

Years had passed and Dalazad started to absorb the world atlas, learning everything about different countries, while becoming an aspiring geographer. He followed his father’s voyages for years, as he had marked each one of them on a world map and would hang it in his bedroom.

In May of 2008, Delazad turned 15 years old. In July, the father and son fled in the direction of Beijing, arriving in the middle of the Olympic preparations.  From there on, they decided to cross over China, Mongolia, Russia, Caucasia, Turkey, and Central Europe, and return to Paris by train; their silk road. Throughout the two months of travelling, these “modern Sindbads” send their letters and photos by mail or text messages to Rachel; mother and spouse, and the central connection between them and their adventure.

A Childhood Promise tells a story, through these letters and Reza’s images, of an initiatory adventure. It is a first life lesson and transition into adulthood for the son. For the father, this trip is an opportunity for intimacy, conversation and a mutual understanding between him and his son.

“I believe that this encounter with the unknown will inspire Delazad to question his own identity and roots throughout this journey. After all, our encounters with radical opposites act as a mirror of who we really are.” Reza